NHL Says Fighting In Parliament Remains Part Of The Game 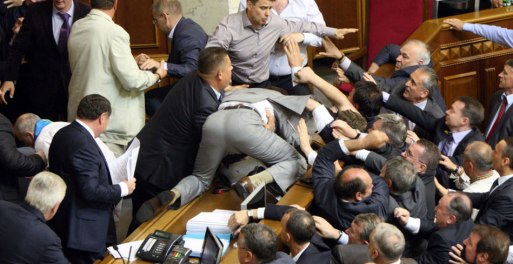 “It’s the only reason I watch,” declares Barbara Audette, mother of two, and regular CPAC viewer. “If I wanted to watch people in suits yabber on about nothing I’d watch the news. For me, it’s all about the fracases. Nothing else gets the crowd on their feet like a good tangle on the floor of the house.”

Public opinion seems to be on her side. An informal survey recently revealed that over 70% of Canadians continue to feel that fisticuffs are an integral part of the parliamentary process. While that’s down 5% from the Mulroney era, the reasons given for the support of the physical game remain largely unchanged.

“How else are you going to protect your star players?” Asks NHL commissioner Gary Bettman. “Not to mention control the opposition and make sure they don’t get too comfortable in the game. And what are you supposed to do when another member insults your mother? Call it to a vote? I don’t think so. As I’ve said many times over the years, fighting has always been a part of our national governance, and it always will be.”