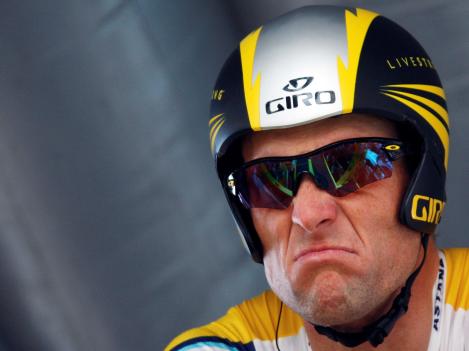 The Russian Federation Of Science Experiments In Sport has today announced that disgraced cyclist Lance Armstrong will carry their nation’s flag at the Rio games, and will do so while connected to a blood-cleansing machine he shares with a live goat, as per his habit.

Vladimir Putin referenced the honour being bestowed on the Texas super doper in a rousing send-off speech he delivered to the remaining members of the Russian team yesterday, as they gathered in the world’s largest hyperbaric chamber shortly before being given their anti-gravity devices and having their hearts replaced with micro-nuclear furnaces.

“Although his name is as American as trailer parks and living on credit, Lance Armstrong is a true Russian in his obsession with being the best at any cost, including all of his friends and personal reputation. Everyone knows it isn’t how you win, but that you repeatedly crush everyone in your path and deny all wrongdoing in the face of overwhelming evidence. This is the Russian way. Although I have never met Lance, we are brothers. Or clones. Whichever is more advanced and easily replicated.”

The chamber erupted into very squeaky cheers and a number of team members broke into a traditional Russian dance, smashing syringes on the floor while repeatedly shaving and regrowing their beards in a furious flurry of furry.

The ground pangolin stopped in the long, swaying grass of the African veld, and turned to face a visiting reporter who had just asked him if he was aware that a virus that appears to have originated in his species has infected tens of thousands of humans, and may yet infect countless more. • “Oh yes,” he said scratching his long nose in what is generally considered to be the universal pangolin signal that it would like some space, “And there’s a lot more where that came from if you and the rest of your horde of hairless planet destroyers don’t leave us, and all of the other animals: The fuck. Alone.” • Prized for being trapped on this planet with us, pangolins are like all creatures that have come into direct contact with human beings: immediately exploited. • Equipped with a tongue that is longer than its body, the pangolin is considered especially well-equipped to spread diseases that will make the entire human race wish they’d listened to Joaquin Phoenix and become vegans while they had the chance. • Speaking on the condition of anonymity, the pangolin said that he’d prefer to not go into the specifics of the diseases his species stands ready to unleash on a particular predator with a penchant for cruise ships and living in extremely close proximity to one another. • “But let’s just say they’ll make that relatively benign respiratory disease that you are all hopelessly trying to quarantine right now look like a sniffle. You think coronavirus is bad? Wait until you find out about Pangola.” • • • • • #coronavirus #animalrights #vegan #virus #satire #pangolin #animals #savetheplanet
#Superbowl #sports #proxywar #politicalmemes
#guncontrol #gunrights #coronavirus #marchforourlives #politicalmemes
#space #nasa #spaceforce #spaceballs #spacefarce #startrek #trekkies #starwars #satire #politicalmemes
#climatechange #davos #thunberg #greta #gretathunberg #environment #news #satire #politics #outandabouter
Awkward.