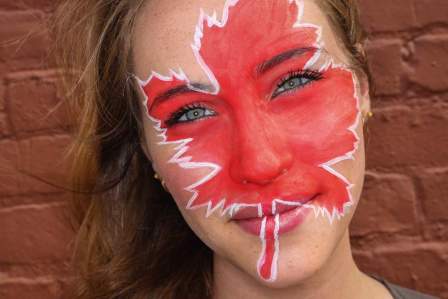 “It seemed like a good idea at the time,” says Marianne Webster, of Kamloops BC, as she cracks her first Kokanee of the day and looks back on fifteen years of having a maple leaf emblazoned on her entire face. “But I think its fair to say that I now regret not just going to the face painting booth like everyone else.”

“It’s closed some doors,” she admits, shaking another can of beer before quietly shotgunning it and still managing to look pensive. “My boyfriend said he found it a little distracting, and eventually stopped returning my calls. My mom cries whenever she sees me. And last year my boss at Starbucks said he really only needed me on the first of July. Out of the whole year. So that sucked”

But instead of focussing on living a life surrounded by people staring quizzically, and attempting to touch her face to see if the maple leaf is indeed real, Marianne says she is, “just trying to make the most of this one day in July that I fit right in with everyone else.” And with that she lets out a rebel yell and cannonballs into the cold waters of the Rocky Mountain lake she is celebrating this national holiday beside. She surfaces moments later and shouts, her voice echoing maniacally off the surrounding terrain: “See? It’ll never wash off!”