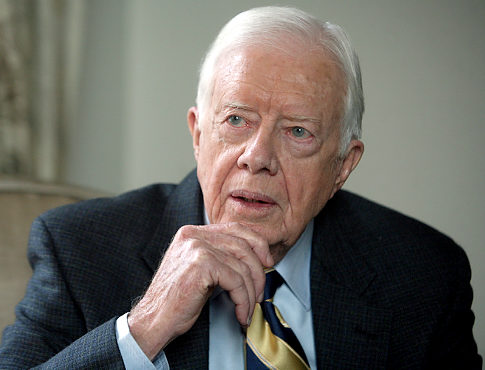 It happened mid-morning, as former president Jimmy Carter was casually reaching for a fresh box of nails while working on a Habitat for Humanity home in Winnipeg, Canada – a four week horse ride northwest of Toronto, if the weather is fair and oats are in season.

“So,” the jovial ex-pres said to his twenty-something helper as he passed her a hammer, “where do you folks head in the winter?”

“Head?” the young woman asked, puzzled by the question, “You mean on vacation?”

“No. I mean…what? What do you mean vacation? You don’t…ohdearlordhavemercyno.” The 92-year-old’s eyes rolled back in horror, as he realizated that all of these otherwise-normal seeming people lived here in the netherworld between Ontario and the Rocky Mountains, ALL YEAR LONG.

“He’s coming to, give him some room. Back it up you bunch of psychos, I said back it up,” a burly secret service agent said as he cleared space around former the fallen world leader, the use of a pejorative giving away his own shock at learning that the government of Canada maintains a gulag.

Jimmy’s eyes fluttered and his mouth gaped soundlessly as he tried to form words. “Get him some water people. Now. Agua. Por. Favour.” The irate agent said as he and his colleagues hurriedly formed a cordon, concerned these odd northern residents would try to eat the former president if they smelled his weakness. At this point Mr. Carter managed to get himself up on one elbow. Stunned, he looked out a window at the downtown core, or what he had previously assumed was a seasonal encampment.

“How? Why? Dear lord.” And then he asked for a seat on the next mail coach west.