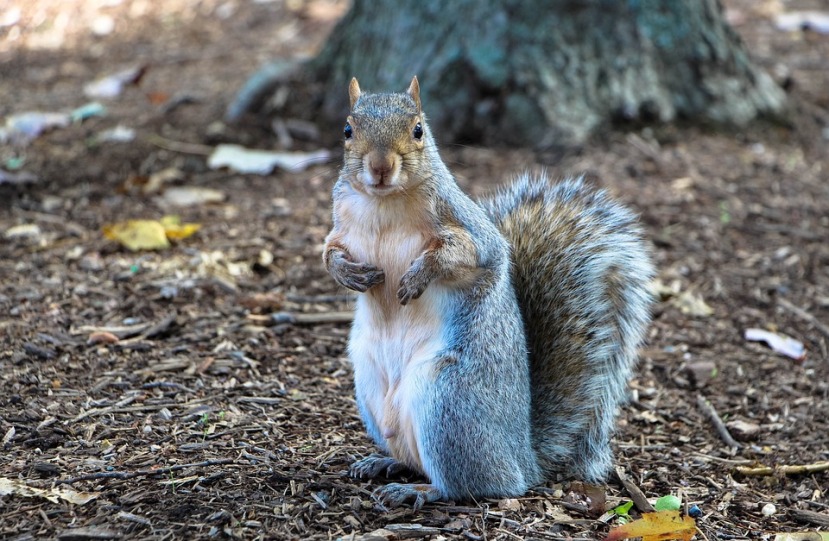 Pausing in a frantic scamper across the top of a fence post, Randall the squirrel admits that what he finds most galling about his annual preparations for winter isn’t the demeaning battle with small brown birds for seeds, it’s the onlooking homeowners, watching his existential battle through their patio doors while wearing other animal’s hair, sipping hot cups of molten chocolate, and grinning like idiots.

“Look at ’em,” the hard-bitten squirrel says as he stops to gnaw on a cigarette butt, nodding towards a large bay window in the back of a house where two people are staring out from their toasty house. They look as though they’re waiting for someone to tell them where the L.L Bean photoshoot is supposed to happen. “Those two wouldn’t last five minutes out here without those bathrobes and access to a twenty-four hour supermarket that takes American Express.”

The interview breaks off for a few minutes at this point, as Randall’s near-constant anxiety gets the better of him and he is forced to rush up and down a tree four times, despite having already thoroughly checked it for berries. This done he returns, out of breath and a little apologetic about his involuntary obsession.

“Sorry, instincts. What was I saying? Oh yeah, gawkers. I don’t begrudge these people the fact they get to live in a centrally heated house, while I scrounge for existence out here dodging cars and sleeping in trees,” the unusually ruminative rodent says as a chill breeze blows through the backyard. “After all, they’re the ones with opposable thumbs and a supposedly advanced social structure. No, what I mind is the way they stand there watching me as if my battle to pre-source enough calories to last me through until March is some sort of performance art put on purely to make them feel cozier in their cavernous home full of food and warm air.”

Saying it was all enough to make him want to follow homeowners down to the grocery store to watch them fight over the last ripe bananas, Randall immediately admitted he didn’t have time for that, and then accused a reporter of being a dangerous distraction.

“It’s easy for you,” the edgy squirrel says as he begins running in concentric circles of panic, “You just sit there all warm at your desk making this shit up, while out here the temperature drops, the picnics are over, and the birds steal all the good stuff from the outer branches of the trees. Been nice chatting, but I’ve got a winter to get ready for, and your online article isn’t even going to make it onto newspaper that I could use to pad my nest. So stand aside. And tell George and Judy they’d better quit staring if they don’t want me to chew a hole in their eavestroughs and start Airbnbing out their attic to every squirrel I know.”