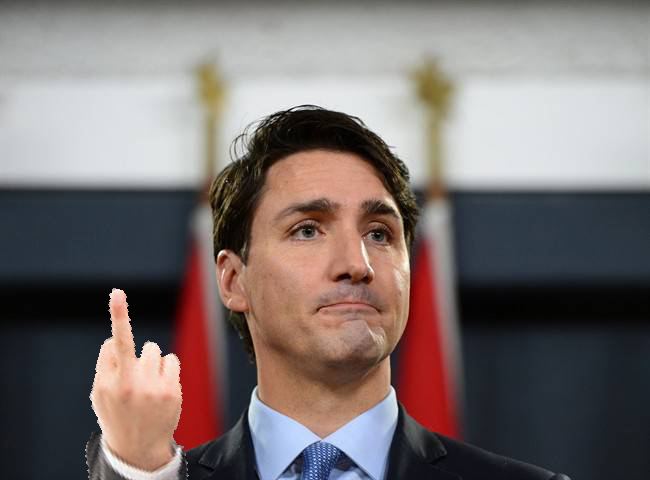 Pausing during a spirited round of carolling on Parliament Hill today – midway through singing Wham!’s Last Christmas while looking wistfully out over an Ottawa that is still mad about his ice rink with rules – Prime Minister Justin Trudeau delivered a message to all of the heartless assholes in Canada who don’t like it when he cries:

And then, as though to underscore that if you don’t like seeing a man cry about matters as important as the extremely premature passing of a musical legend, or while apologizing for one of the gravest abuses of its mandate the Canadian government has ever made, the Prime Minister began to cry.

“I stand before you today, to apologize to those of you who object to seeing me display emotion. I’d like to say I’m sorry that you are cursed with hearts of stone, and the emotional intelligence of a zamboni. It is a shame. It is a crying shame. That is why I’m crying. That plus the fact I know it drives your cryogenically-frozen souls crazy and that makes me both very happy and very sad in equal parts. Either of which would be enough to make me cry.”

Online forums, Facebook groups, and Twitter as a whole, all recorded sudden spikes in traffic as the madding crowds of people who keep their feels in Yeti coolers – bringing them out once a year to check they are still in stasis before topping up the liquid nitrogen and securing them for another lap through the emotionless void of space – rushed to weigh in.

“Stow it Crydeau, no one elected you Prime Snowflake,” said one commenter who couldn’t be bothered to make a clever word play, so instead opted to just act like a dick.

“Bringing down the good name of Canada,” said another, whose profile photo displayed vociferous support for Donald Trump, and seemingly an utter lack of appreciation of irony.

Addressing these, and the many other complaints that have reached the Prime Minister’s ears this past week, Trudeau was clear.

“Last Christmas I gave you my heart. And the very next day you were bitching about it on Facebook. This year, to make the best use of my tears, I’m going to televise myself crying in a continuous loop until you all get comfortable with the fact that men weeping is here to stay, and if you can’t embrace that because your pa was a remote, unforgiving, Rocky mountain range of a man from cradle to grave, then you’re going to have to deal with that on your own. But I will be here to give you a hug when you’re done. And help you give your heart to someone special. Special.”