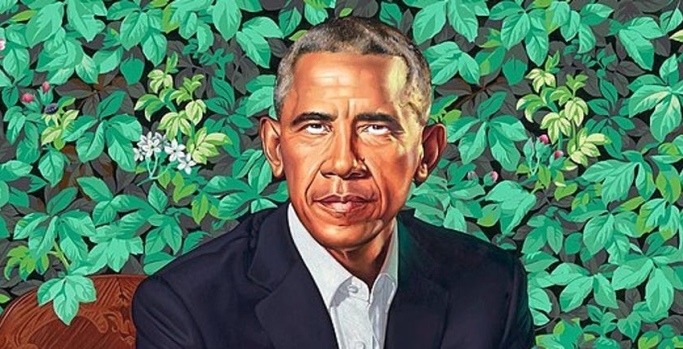 You can almost hear the former president saying “seriously?”

Barack Obama’s presidential portrait was revealed in Washington today, and the comparisons to Mona Lisa have been as immediate as they are expected.

“The man, she is the enigma,” says noted art-historian Basel D’Arte, best known for his critiques of famous paintings, and less so for his grasp of the distinctions between masculine and feminine pronouns in the English language.

“When you look at the Obama man, you see much beauty, strength, and a certain how-you-say? A bit of a real fuck-you? Oui, c’est ca. A certain ‘fuck-you-I’ve-thought-about-this-a-lot-and-I-don’t-think-you-really-have. This is what the painting says, and that is why his eyes? They rolls like a royce.”

Basel is not alone in his analysis. As soon as the portrait was unveiled members of the audience were seen to slowly rise and begin moving about the large room, trying to find an angle from which his eyes did not appear, ever-so-slightly, to be rolling. And all present eventually agreed that that is precisely what they are doing.

“Really remarkable,” said the former president’s former photographer, Pete Souza, “I’ve seen that eye roll a lot over the years, usually when Rand Paul or Ted Cruz were in our vicinity, but to see it up there in oil, amongst all those leaves, for all of time? That’s pretty special right there. That’s my Barry.”

Today’s grand unveiling will also be the last to take place at the National Portrait Gallery, after the institution used the occasion to announce that it thinks 44 presidents are a nice round number to hang on the walls, no need for 45.

“And so we will be closing our doors thanks very much,” said the newly appointed gallery director, Viv Le Revoler. “But that really is for the best. I’m sorry we must insist. I will say that we haven’t ruled out reopening sometime in the future, in say, 3-7 years? And if we should do so there really wouldn’t be any need to catch up on what might have happened between now and then.” Here Le Revoler paused, and took a moment to gaze down the long hall of presidential portraits, to the end where George Washington sits; his square jaw looking increasingly clenched during these years, eyes seeming to grow grimmer every day.

“Yes. Sometimes an empty, unused space can speak more loudly than anything.”