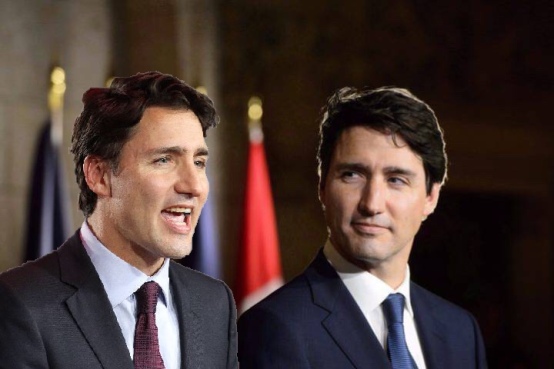 In the latest example that he will not be out maneuvered by the Conservative Party of Canada, Prime Minster Trudeau has today gone on the attack. Against Prime Minister Trudeau.

“It’s a lot of money,” Trudeau said, referring to the controversial vacation as he hustled to find a tailor to recut his suits to the latest in 1980’s fashion, and then on to a barbershop for a hair thinning, in keeping with CPC party guidelines. “Pipelines and Bahamas trips are what Canadian taxpayers in key ridings for my re-election care about, and as their representative I intend to push through the one, and endlessly pursue justice on the other. The Prime Minister, aka me, needs to repay that vacation. And don’t get me started on the Parliament Hill ice rink or the Atwal scandal.”

“I don’t think he really knows what he stands for right now,” said the PM, referring to his conservative alter-ego. “Clearly the Canadian people want healthy economic growth, but not at any cost. And as for vacations, I think Alt-Trudeau sounds like he could probably use one himself right now. I’ve said all I’m going to say on that matter. If the minister wants to further discuss that issue, or any other, he can ask me in private, late at night, when we are lying in bed staring at the ceiling revisiting where we went wrong on electoral reform.”

The fast footwork by the Prime Minister – while running the risk of tripping over his own feet – appears to have succeeded in its short term goal of leaving his most vociferous critic, Andrew Scheer, with little to say.

“I believe the correct term is PipeDivine, and they aren’t oilsands, they’re Never-Ending-Growth Sands, as pretty much any Canadian will tell you. Other than that though, I’d say we’re good here.”

While it’s unclear how long Trudeau intends to do the Conservatives’ work for them, or why, what is clear is isn’t playing well with his core supporters, or his main detractors, or those in the middle.

“I voted for him because I wanted to see action on immigration, women’s rights, and protection of the environment,” says Mary Slogan, resident of Buffalo Falls, Ontario. “And now I’m a woman considering immigrating to a country that respects the environment.”

“Couldn’t stand him before, can’t stand him now.” Says Fred Furlough, of Edmonton, Alberta. “He could promise a honey lager pipeline from Sleeman’s to my house and I’d still refer to him exclusively in the derogative.”

“Jagmeet’s been quiet,” said everyone else, kicking their boots together as they wondering what happened to things like spring, and following through on campaign promises.