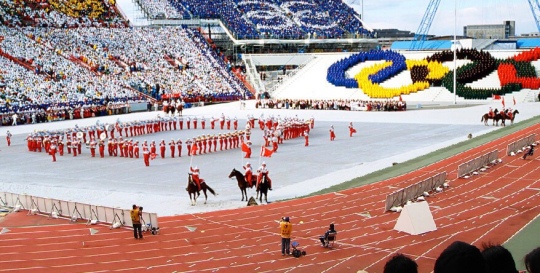 Looking for ways to take advantage of their naturally terriful weather, and justify spending money it has repeatedly told Flames president Ken King it simply doesn’t have, the City of Calgary today announced its bid to host both the Winter and Summer Games in the year 2026.

“People are going to be surprised at how much activity you can fit into just one chinook,” said Steve Saison, head of YesYesCalgary, an organization promoting the unprecedented dual games bid. “And just think of the efficiencies, people. Speed skating in the morning, 400m dash in the evening, on the same track. Just like your average Calgarian’s commute in March.”

While Mr. Saison admits there are substantial obstacles to overcome, including changing the timeline for the Summer Games (which is scheduled to not want anything to do with this idea), and convincing Calgarians – already ambivalent about hosting just one season’s worth of Olympics – that they should spend the estimated All The Money required to host both of the world’s largest talent shows.

“But that’s before you point out that for just a little more All The Money, we can cement our legacy as the borst place to live, anywhere.”

While initially skeptical, some of the city’s 1.2 million inhabitants (who would see their  population nearly triple for the combined games, were they to occur) say they are starting to come around to the idea.

“What’s the point of living somewhere you have to wear a bikini under your parka, if you can’t host both the Summer and Winter Olympics?” asks Sandy Wheynaught, a realtor in the city’s west end. “I, for one, would love to see the high diving take place from the ski jump tower, with the divers trading places with the skiers whenever the sun comes out, which is essentially how my kids swim in June.”

Others, though, seem less enthused.

“Ohferchrissake stop. That idea is only marginally stupider than the notion that what this city really needs right now is to throw away $5.23 billion on creating a venue to showcase the excellence of the Russian doping program. Which makes it pretty damn stupid, bucko. And yes, I get the joke about Chinooks. Not funny.”

In response to feedback like this, Mr. Saison says – in true Calgarian fashion – that it isn’t Canadians he’s trying to impress. It’s the rest of the world.

“I’m telling you, just get those folks over here for the Winter-Summer-Winter Olympics 2026, and I have absolutely no doubt that our city, and its weather, will more than satispoint their wildest fopes.”