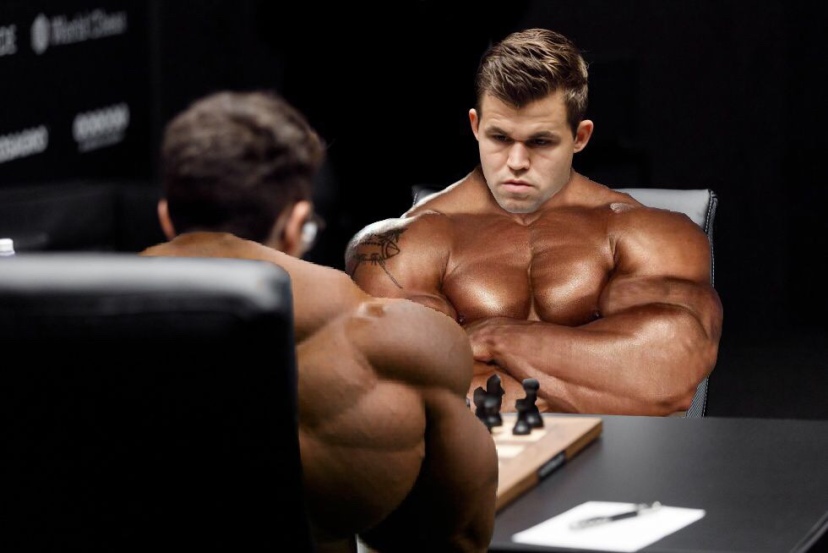 LONDON – The 2018 World Chess Championship came to an early, and shocking, conclusion today, when both players were disqualified for testing positive for anabolic steroids, one of three substances banned by the tightly-controlled sport – along with fun, and girlfriends.

“Everyone’s doing it,” shouted the reigning champion, Norwegian Magnus Carlsen, as he was led away by a team of burly security guards after opening the fifth game of the scheduled 12 with a Ben Johnson Gambit, sacrificing his testicles for faster recovery times and overall mass.

The surprising finish marks the first time both contestants have been disqualified at a World Chess Championship since Bobby Fischer and Boris Spassky were both found to be in violation of the no-pinching-yourself-to-stay awake rule, in 1981. An occurrence still spoken of in hushed tones in the sport. Though this is true of all conversations about chess, a game which some call ‘The Beautiful Tedium.’

While unusual for the UFC (Ultimate Federation of Chess) to test the mathletes for illicit substances, the federation’s president, Dana Black, said suspicions were raised when both Carlsen and the American challenger, Fabiano Caruana, showed up for the tournament having gained over 50 kgs apiece, and: “Looking unusually shredded for two young men who spend an average of twelve hours a day staring at a table.”

“Then when Carlsen broke a board over his knee in the preliminaries, in a fit of pique at only having 10 bottles of Evian on the table beside him instead of his usual dozen, and Caruana inadvertently pulverized six of his pieces in one match due to over-gripping, we started to suspect that both players were on the juice.”

Experts believe it was only a matter of time before doping made its way into chess.

“It’s been going in Scrabble for years,” says Vlad Gorchek, a chess master who now runs a consultancy called Are You Sure You Want To Do That? “How the hell else do you think people come up with words like ‘Quixotry’? Not to mention The Settler’s of Catan folks. A lot of those guys have blood transfusers built into their chairs. And don’t get me started on Monopoly. Let’s just say ‘follow the money.'”

In an attempt to get out ahead of the growing crisis in its ranks, the UFC has announced that they have suspended both players for ten games or 15 years. Which ever comes first.