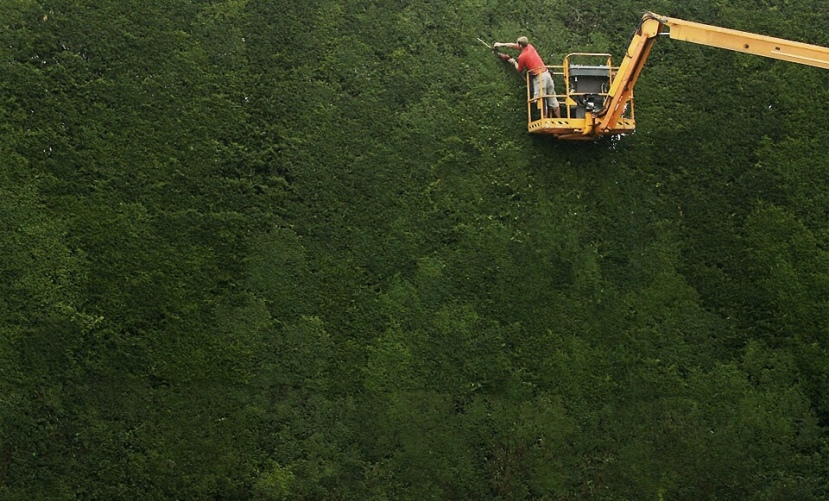 A worker trimming a smaller model of the proposed thousand-foot high shrubbery.

In a stunning rebuke of the 46th best president in American history, the United States’ northern neighbour shattered numerous crowdsourcing records today, when it raised billions and billions and billions of dollars to plant and maintain a living barrier between themselves and the adjacent idiocracy.

“We’d heard that a bunch of people down in the You-Ess-of-Eh had decided to empty their wallets out for a wall that won’t block anything other than half of all escape routes, when their dirty bomb of a president melts through his retaining barrier,” explains the man who started the campaign, Tom Candy, of Fewmarket, Ontario.

“So naturally our first thought was: how can we best deal with this shitshow as it unfolds directly beside us, and add a little ever-greenery to a world which, it has to be said, is looking a little bleak right now? The answer was, of course, legalizing marijuana. But with that already having been done, our next thought was: let’s plant a privacy hedge.”

The campaign started with the modest goal of raising $250,000, which was estimated to be enough to pay for an ad on Fox & Friends asking Americans to help Canada secure its border against the dreaded MAGA-16 gang.

“But when we achieved that ambition in less than one hot minute (Celsius), we realized we needed to expand our operations from trolling the dredges to bankrolling the hedges,” Candy says, as he directs another tractor trailer into a vast warehouse he has stocked with young yew saplings, waiting to take their positions along the formerly longest undefended border in the universe.

“And in under two hours we collected $6 billion Canadian. Which is extraordinary, really, given the time of year, and current cost of hockey tickets.”

In an interesting side-bar, one that some have taken to indicate that the stresses of modern populism have already migrated north, a number of spin-off campaigns have begun, calling for privacy hedges between many of Canada’s own provinces.

“We’re seeing funds started on both sides of the Rockies, so it looks like B.C. and Alberta are going to work together to block each other out,” says living barrier expert, Mick Terser. “And Quebec has raised over $10 million for their ‘haie de la vie privée’, to get something between themselves and the increasingly desperate Ontarians, as they try to escape Doug Ford’s term as Revengier. Heck, even Newfoundland has started a petition to rename the Gulf of St. Lawrence the ‘Aqua Hedge’. So yes, it’s a very fractious year everywhere you look.”

News of the cross-country shrubbery came as a surprise to many Americans, who were pretty sure they’d heard that the Canadians had already planted one of those two years ago, in the days following the U.S. decision to elect a discarded traffic pylon – found in a ditch on the road to nowhere – as their leader.

“No,” corrects Candy. “That was a joke. This time we’re serious.”