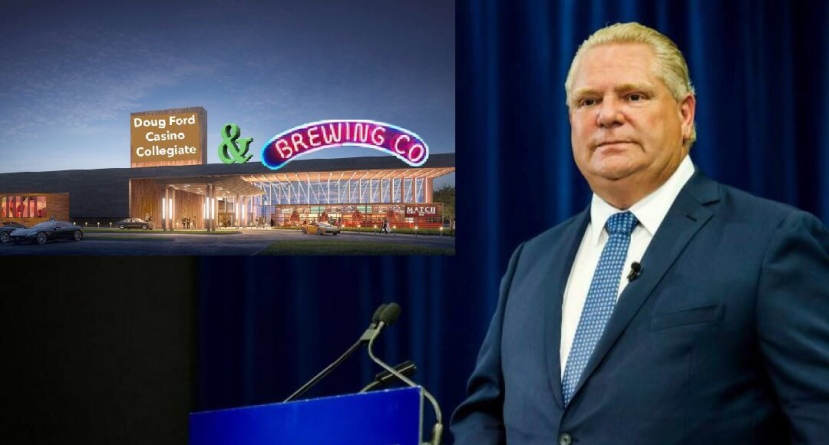 The Doug Ford Casino Collegiate & Brewery Co. – which the premier thanked Education Minister Lisa Thompson for naming, without any guidance from Ford whatsoever – is expected to open in 2021. The new complex is being touted as offering students a viable way to help pay for their high school education (which, incidentally, will no longer be free) and providing their parents cheap drinking suds to help wash away the pain of watching their children’s futures being sold by a guy who thinks Catcher in the Rye is a story about Pat Borders getting lost in the Loblaw’s bread section.

“Folks, there’s just no better way to teach children the importance of math than handing them a stack of chips and saying this is your blackjack table, and if you mess up you’re fired,” the premier said, looking almost wistful as he remembered his days running an illegal dice game under the stairs at his own high school, which he attended for parts of two consecutive Septembers sometime in the late 1970’s. This before he dropped out to embark on the predictable path to the premiership by becoming a small-time drug dealer.

The announcement comes hard on the heels of the Ford government continuing to find new ways to cut costs, in a valiant effort to avoid fairly taxing large corporations and the wealthy by taking it to the real fat cats of the province: the young and vulnerable.

Expected to cost $250 million to build, $40 million a year to subsidize, and $2 billion in the lost potential of the students who will receive their education there, the move is still being seen as one of the more astute things the Ontario PCs have done since coming to power nine months ago. For whatever that’s worth.

“For too long students in Ontario have learned in quiet classrooms and buildings dedicated to children,” the premier said, raising his voice into a singsong that attracted numerous vultures to circle overhead.

“Now it’s time they faced the real world. That of cheap beer and broken dreams; 24 hours a day, seven days a week. Trust me, the efficiencies are endless. Who needs school buses when there are already daily shuttles from the old folks’ homes to the casino? The kids can catch a ride on one of those, and along the way pick up tips on which slot machines haven’t paid out in awhile.”

Other advantages of the integrated gambling/drinking/learning facility that were brought up during today’s press conference were parents getting to play craps while waiting to pick up their kids, children getting to see firsthand what adult apathy looks like, and teachers getting the option of putting their pensions all on black when it comes time to retire.

“But remember,” the pit manager of Ontario said, smiling widely as he spread his truncated arms less-than. “The House always wins.”