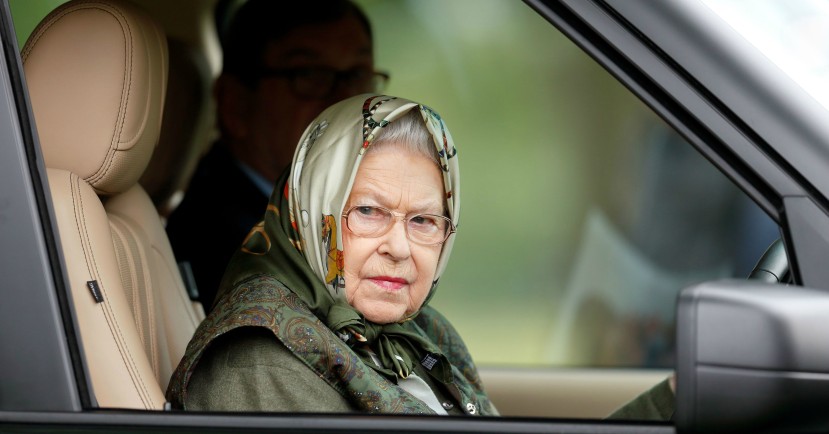 An unamused Queen, on her way to an emergency review of her brass knuckles collection.

Primal screams filled the usually muted environs of Buckingham Castle’s western greeting hall, as the Queen, in camouflage exercise tights, and a black sweatshirt with bold pink letters reading “Nasty Majesty,” worked through her daily self-defence routine early this morning. The sovereign head of the United Kingdom was grimly preparing for U.S. President Donald Trump’s upcoming visit. And she was taking no chances.

“Clavicle smash with the edge of your hand, kick to the groin, knee to your orange assailant’s forehead. Walk away.” Connor McGregor clapped his hands as he coached the Queen, the former UFC star’s Irish accent echoing in the gilded chambers. “That’s it. Swagger. Stalk around him. Fake a punch to Melania, get her cringing. Good, now back to Trump. Stand over him like Ali. Make him wish he never ran for office, much less thought he could come over here after slagging off our nutmeg, Ms. Meghan Markle.”

The uptick in intensity of the Queen’s hand-to-hand combat training comes after Trump took the unusual step of endorsing Boris Johnson for “president, king, or whatever those tea-spillers call their leader,” before going on to call Markle nasty; leading to the immediate deployment for Mar-A-Lago of a U.K. warship full of marines with stern looks.

While already well-versed in the subtle arts of putting a visiting boor in his place via deft royal slights such as not blinking, drinking her Pimms without ice, and galloping around the room on a white horse while blowing a hunting bugle, the Queen also appears ready to take matters into the hardened edges of her lethal hands.

Finishing off her routine with McGregor by reducing a large punching bag to a shredded pile of leather and stuffing, the 93-year-old monarch turned and walked calmly out of the greeting hall. She paused at the doorway, adjusted her cardigan, wiped a single bead of perspiration off her brow, and without turning back into the room said quietly over her shoulder:

“It ain’t bragging if you can back it up.”

#space #nasa #spaceforce #spaceballs #spacefarce #startrek #trekkies #starwars #satire #politicalmemes
#climatechange #davos #thunberg #greta #gretathunberg #environment #news #satire #politics #outandabouter
Awkward.
Aye . . . #Scotland #Britain #Iceland #Greenland #Feckingsane #scottishreferendum #Corbyn #Canada #satire #satirememes #borisjohnson #brexit #vote #ukmemes #scottishmemes #banter
Like a tsunami of fetid masculinity washing over the beachhead of bare minimum progress, old man rage levels crested at record highs today, following the news that Greta Thunberg has been named Time magazine’s Person (Who Owned All Of The Blatantly Backwards Asses) Of The Year. “Other than coalescing support around a movement to save the planet, then backing it up by sailing across an ocean twice, initiating rallies of astonishing size and fervour in most of the world’s largest cities, and inspiring an entire generation of young people to take action on climate change, what on Earth has that young lady done to deserve Person of the Year?” screamed an extremely triggered guy, as he rapidly flooded his own basement with ineffective anger. “Not like Trump, who received the honour for his incredible humanitarian work to save the lap dances, and signing a bill to protect 10,000 hectares of bacon double-cheeseburgers in perpetuity. Now there’s a leader.” . . . Link to full article in bio. #greta #gretathunberg #time #timepersonoftheyear #climatechange #globalwarming #climateactivisim #sweden #stockholm #environment #extinctionrebellion #satire #politics #environmentalist
BROKEN FORKS – Saying she just wasn’t ready for the look on her dad’s face when she tells him that there’s no such thing as trickle-down economics, little Julie Wilson, of Broken Forks, Montana, today admitted it was getting pretty hard to answer her Republican father’s increasingly probing questions. “At night, when he’s getting ready to head out to his second job – the one he works in the evenings to pay for our health insurance – it can be really hard to look him in the eye and say supply-side theory isn’t going to let him down this holiday season. Not like last year. And the 39 before it.” Eight-year-old Julie says that the elaborate charade she goes through to avoid dashing her dad’s belief in the inherent decency of rich people has gotten especially hard of late, as many of her father’s friends have independently come to the conclusion that the beneficence of the Republican party is at best an outdated myth. And is, at worst, a willful manipulation of a significant portion of the American electorate. “Last week his best friend, Tommy from next door, started saying he heard Donald Trump made most of his money gaming the tax system, and was just treating the highest office in the land as a way to build his brand and give jobs to his otherwise-unemployable offspring and their spouses. After that I could see pops starting to look at his thirteen-year-old car, vacationless winter, and nearly empty retirement savings account in a bit of a different light.” Link to full article in bio. #dems #democrats #economics #memes #trumpmemes #satire #satiricalmemes #theonion #trickle #trickledown #politics #poli #christmas #christmasmemes