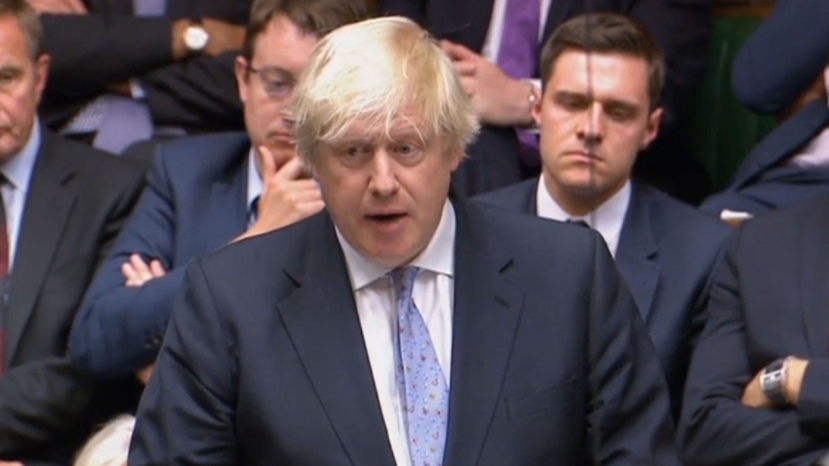 Echoing the great American wartime president Franklin D. Roosevelt, Johnson advised the citizens of the U.K. that they had nothing to fear except him, himself.

LONDON – In perhaps the most moving speech ever given in a chamber that has faced some of the most fearsome and ferocious challenges a nation has ever stared down, Boris Johnson today stood before the parliament of the United Kingdom, and promised to lead his country out of the smoldering remains of the scorched earth leadership bid of one Boris Johnson.

“Leavers, remainers, countrymen,” the mop-headed power-bandit said, as he looked up at the oak-lined walls of the august hall, and idly wondered how much he could sell those for, should push come to shove with this whole ‘market collapse’ business. “Lend me your tears. With Nige as my witness, I stand before you now to promise you that I will save you from the intractable mess Boris Johnson landed you in, or my name isn’t Alexander de Pfeffel Johnson. Known to my friends as Boris.”

Reactions amongst the public outside of Westminster ran the gamut between a desire to throw many, many, milkshakes; and utter disenchantment with the peroxide plonker

“Bloody wonk-haired wanker, that’s what he is,” said a diminutive older lady wearing a smart jacket and sensible shoes, as she kept an eye on her impeccably groomed Doberman. “He’s like the guy who slashes your tires, and then tells you he’s got a great deal on Goodyears if you’ll just let him tow you all the way back to feudal England. But I don’t even own a car.”

#space #nasa #spaceforce #spaceballs #spacefarce #startrek #trekkies #starwars #satire #politicalmemes
#climatechange #davos #thunberg #greta #gretathunberg #environment #news #satire #politics #outandabouter
Awkward.
Aye . . . #Scotland #Britain #Iceland #Greenland #Feckingsane #scottishreferendum #Corbyn #Canada #satire #satirememes #borisjohnson #brexit #vote #ukmemes #scottishmemes #banter
Like a tsunami of fetid masculinity washing over the beachhead of bare minimum progress, old man rage levels crested at record highs today, following the news that Greta Thunberg has been named Time magazine’s Person (Who Owned All Of The Blatantly Backwards Asses) Of The Year. “Other than coalescing support around a movement to save the planet, then backing it up by sailing across an ocean twice, initiating rallies of astonishing size and fervour in most of the world’s largest cities, and inspiring an entire generation of young people to take action on climate change, what on Earth has that young lady done to deserve Person of the Year?” screamed an extremely triggered guy, as he rapidly flooded his own basement with ineffective anger. “Not like Trump, who received the honour for his incredible humanitarian work to save the lap dances, and signing a bill to protect 10,000 hectares of bacon double-cheeseburgers in perpetuity. Now there’s a leader.” . . . Link to full article in bio. #greta #gretathunberg #time #timepersonoftheyear #climatechange #globalwarming #climateactivisim #sweden #stockholm #environment #extinctionrebellion #satire #politics #environmentalist
BROKEN FORKS – Saying she just wasn’t ready for the look on her dad’s face when she tells him that there’s no such thing as trickle-down economics, little Julie Wilson, of Broken Forks, Montana, today admitted it was getting pretty hard to answer her Republican father’s increasingly probing questions. “At night, when he’s getting ready to head out to his second job – the one he works in the evenings to pay for our health insurance – it can be really hard to look him in the eye and say supply-side theory isn’t going to let him down this holiday season. Not like last year. And the 39 before it.” Eight-year-old Julie says that the elaborate charade she goes through to avoid dashing her dad’s belief in the inherent decency of rich people has gotten especially hard of late, as many of her father’s friends have independently come to the conclusion that the beneficence of the Republican party is at best an outdated myth. And is, at worst, a willful manipulation of a significant portion of the American electorate. “Last week his best friend, Tommy from next door, started saying he heard Donald Trump made most of his money gaming the tax system, and was just treating the highest office in the land as a way to build his brand and give jobs to his otherwise-unemployable offspring and their spouses. After that I could see pops starting to look at his thirteen-year-old car, vacationless winter, and nearly empty retirement savings account in a bit of a different light.” Link to full article in bio. #dems #democrats #economics #memes #trumpmemes #satire #satiricalmemes #theonion #trickle #trickledown #politics #poli #christmas #christmasmemes